Bringing the Gospel into conflict with the bondage of Sin and Death.

We are a network of abolitionists who reject what is commonly referred to as “the state,” and how it is improperly defined as “government.” We are disciples of another King unto another kingdom, endeavoring to perform or partake in the “ministry of reconciliation” which opposes all the kingdoms which allow man to rule over man by force and contract. We are subjects of the government of God. As no one can serve two masters, we do not pragmatically adopt the patriotism or the statism of men for the work which belongs to the cause of Christ. Therefore, we non-violently array ourselves against “the state”, and call upon all of mankind to come under the Kingship of Jesus Christ, to find life and forgiveness in Him, to be adopted into his civil society, and to be guided by His laws, as he writes them upon your heart and mind.

The ministry of the human civil government is one of covetousness, vengeance, and deferred responsibility. The government of God that Abraham established, and Moses received cannot be mistaken for it, and Israel’s embrace of it was condemned as disobedience. Therefore, the Christian reformation of society and moral sentiment necessitates its spiritual overthrow by the conversion of its members and subjects.

The cathartic idea, based not upon the Gospel but upon sophistry, that to “abolish” an evil is ultimately to criminalize it, is equally as false as it is tragic. It hands the injunction to “tread of serpents” over to an unchristian mafia who routinely acquiesce to the demands of reform in the very interest of subverting them (id est, incrementalism). It robs God’s people, clothed with power and entrusted with weapons able to tear down strongholds, of their true position in history as the body of Christ. The Son of God appeared to destroy the works of the devil, and this is who we follow.

“Civil magistrate” is a euphemism for “gang member” and the definition of a “false god“. The popular, but unfortunate tradition in “christian” history of sanctifying Babylonian, Egyptian, and Roman statism is to be swiftly ended. Some modern day activist groups of professing christians have attempted to assert that civil “courts cannot make law” (even though they can and do). But it is time for them to declare that legislators cannot make law, and that their legalism binds men to civil bondage under Benefactors who exercise authority. Christians are in agreement that the LORD is our judge; the LORD is our lawgiver; the LORD is our king; He will save us.

In taking up the call and cry of abolition, which means to reject the violence-monopoly possessed by the gods of the state, we expect to be misapprehended and mischaracterized. We expect we will be told that we do not seek “real” abolition (exempli gratia, criminalization). We will be said to only be able to “hold signs on the street corners and hope for the best” in lieu of creating political action committees and becoming institutionalists. We will be called pietists and, rightly, anarchists.

Nevertheless, we seek to expose the absolutization of “the state’s” involvement in social reform while simultaneously speaking and acting boldly in the cause of God and on behalf of the downtrodden. We will organize mass non-violent resistance to ungodly machines and systems of sin. We will “scatter tracts like raindrops, over the land“, employing moral suasion and trusting in God for the conversion of the people. We will engage in various online information campaigns. We will produce art to the glory of our maker and on behalf of the perils of the afflicted. We will invoke and put into practice a culture of Christian sacrificial love and service to all who are in need, both spiritually and physically. We will rescue those being taken away to death. We will publicly undermine the kingdom of darkness through a societal clash of absolutes. We will confront the overwhelming culture of professing christians with the question: “what does Christianity look like in a culture that kills its children, or sells them into socialist bondage?” We will strive to live godly lives for Christ Jesus, seeking to love God and neighbor by the guide of the Holy Spirit, to live qualified for and worthy of God’s work. We expect to prevail through benevolence and the foolishness of preaching.

To repeat ourselves: The Son of God stepped down into space-time to become the Son of Man, like us in all things, in order to set us free from the dominion of man and his usurping jurisdictions. Christ’s death and resurrection sets us against the rudiments of this world that lead to death under the governments of men and allows us to be free souls in resurrected life within the Government of God. This is the good news of the sacrifice of our conquering King, to destroy these works of the Devil.

I am an Abolitionist!  I glory in the name;
Though now by slavery’s minions hissed, And covered o’er with shame;
It is a spell of light and power, The watch-word of the free;
Who spurns it in the trial-hour, A craven soul is he.

I am an Abolitionist!  Then urge me not to pause,
For joyfully do I enlist In Freedom’s sacred cause;
A nobler strife the world ne’er saw, Th’enslaved to disenthral;
I am a soldier for the war, Whatever may befall.

I am an Abolitionist!  Oppression’s deadly foe;
In God’s great strength will I resist, And lay the monster low;
In God’s great name do I demand, To all be freedom given,
That peace and joy may fill the land, And songs go up to heaven.

I am an Abolitionist!  No threats shall awe my soul;
No perils cause me to desist, No bribes my acts control;
A freeman will I live and die, In sunshine and in shade,
And raise my voice for liberty, Of nought on earth afraid. 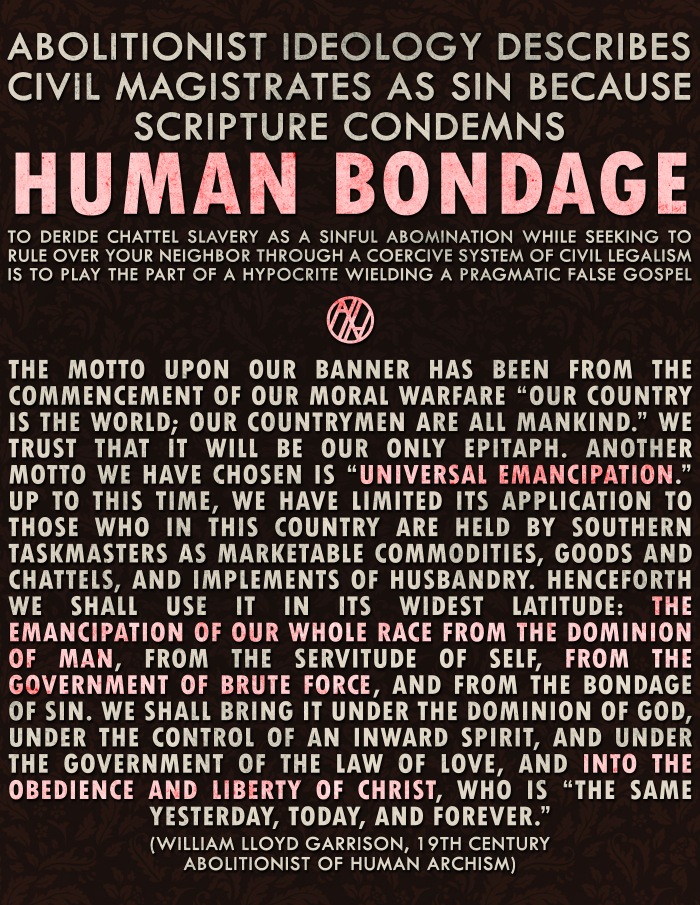