On The Role Of The Modern Day Pastor

When you elevate a job, profession, or role to a position of authority, disconnecting it and compartmentalizing it from the character and obedience of the person performing that job, profession, or role, then you are extrapolating the office from it’s officer. This is witchcraft and superstition: as if your mere words or rites or incantations or rituals or formalities have any real power to make changes in your life or serve you in any viable way. Such incantations demand that a title of a man justifies the man, and not vice-versa. As if the power, glory, and pleasure of God can be fulfilled and controlled through divination by ascribing the right words (“pastor“, “elder“, “shepherd“…) to a man in a collar, or by association in fulfilling the right exercises (“baptism“, “tithing“, “church membership“…), going through the motions of churchian culture, copyrighted by an institutionalist covenant with false gods. These distractions and busybody, counterfeit caricatures of pious “religion” are not subjected to the jurisdiction of God’s Kingdom. Their magicians and sophists and warlocks do not keep the commands of Christ and reflect the role of Biblical and historical pastors and elders, but rather something less productive than even the Pharisees. And, like the Pharisees, they are not even actually ordained in the Biblical sense, and will lead you into the bondage of public religion which provides for them their 501c3 covens and sustains their panhandling pulpits. “Pastors” aren’t meant to be institutionalists that attend seminaries for formal education, so that they can make a profession out of eisigeting Scripture in order to lead an army of pew-people in ritualistic sing-song, while offering tax-write offs for their tithes in fiat currency. These men do try and model themselves after human civil government though since their 501c3 buildings are incorporated, not under Christ, but the attorney General.

There are men out there who have something to gain by being public “servants”. We call them politicians who receive public funds as a salary, through force by taxation, for doing little to nothing to benefit society. There are also men out there who have something to gain by not serving the people in any way. We call them “pastors” who receive “tithes” and send the people to receive their socialist daily bread from the “Benefactors” who exercise authority. These two groups complement each other and work together in a cartel; with public religion on one side, churchianity on the other side, with sophistry, nationalism, tax write offs and “parachurch” ministry to link them. You can read more about careerism as a convenient substitute for ecclesiastical roles and social virtues here.

And then there are those who have something to lose by serving the people and are doing it anyway. These are the men that threaten the livelihood and comfort and status and worldly tradition of the people in the other two groups.

The shepherds of the first century provided real, selfless service and practiced the pure religion that not only sustained an entire nation of Christians in welfare, education, healthcare and salty-bright holiness, but did so in humility and meekness without any positions of authority. They blazed the trail for an actual and literal Kingdom of God complete with rights, responsibilities, ordinances, government, and prosperity. Real pastors were the titular government of the people, an order of ministers who owned everything in common, called out from the congregations in order to redistribute their free will offerings to those who had need. This was the Lord’s table that operated in the exact opposite way than the money changer’s tables. Ministers are Benefactors who do not exercise authority, binding the Christian kingdom in faith, hope, and charity as opposed to contract, entitlement, and taxation of the (prime) ministers of the worldly kingdoms. The far-cry clergy of this century maintain a deceitful version of the Kingdom of God. When professing Christians became slothful and covetous, applying to the false gods of human civil government for validation, protection, provision, and direction, the relationships of those “christians” and the characters of those pastors changed through pagan perversion. Their interpretations of the injunctions of Scripture were perverted in the process, starting a snowball effect regarding dead traditions and human superstitions that culminate in what we have today. Modern christians have redefined religion to make it about going to a building once a week in order to sing some songs, listen to some sophistry, and eat their crackers and drink their juice. Sometimes they dunk each other in the baptistry. Going through the motions advertised by these cathartic, entertaining rites and rituals of 501c3 untrue and defiled religion will only leave you spiritually, emotionally, and intellectually empty, waiting to be filled by literal destruction contingent upon the inevitable collapse of a society in want of righteous, true Christianity.

Flee the silly, superstitious cult of Churchianity. Its thin veil masks its tether to the unrighteous mammon, and just like every incarnation before it, that mammon will sink like the Titanic, capsized from its own sloth, lethargy, covetousness, and hatred for its neighbor and the God of the early Christians.

Do not be like the lotus-eaters of the modern Lord’s supper, or listen to the siren’s song emanating from the pulpit. They will only confuse you and lead you to your destruction, albeit piously and merrily. Rather, repent and seek ye first the Kingdom of God and His righteousness. Believe on the Gospel of God, so that you may be redeemed from giving men arbitrary authority over your heart, soul, and mind. 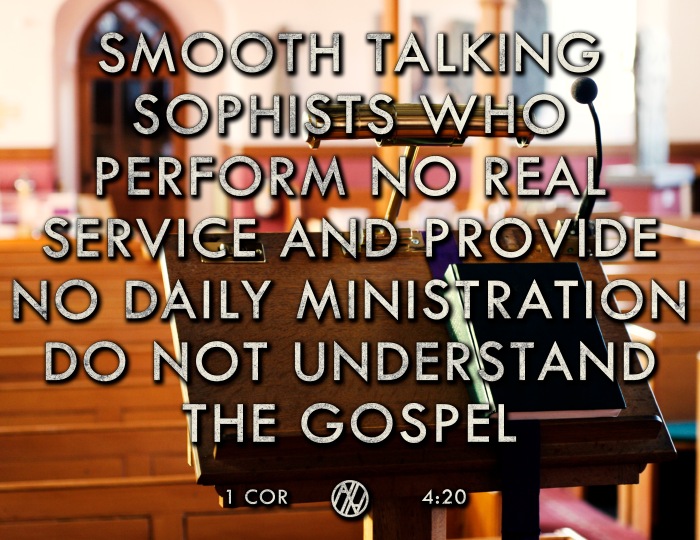