The Gospel of Men Unto Damnation

“We must elect good men into office.”

This is the gospel of men who presuppose themselves to be good men and have good desires, whether on the left or the right, or who identify with Libertarianism or with Communism or with Reconstructionism.

“We must elect good men into office.”

This is the gospel of everyone who has voted, presupposing that the voters of other men were bad men with bad desires, whether on the left or the right, or who identify with Libertarianism or with Communism or with Reconstructionism.

By the only standard of goodness that matters: that of Jesus Christ, the good King of a good kingdom, full of men who want to be good, good men do not run for office and good men do not elect men into office because desiring Benefactors who exercise authority is an objectively bad thing for the exact same reason why men are dissatisfied with their current Benefactors who exercise authority and want to elect different men to rule over their neighbor so they can be satisfied.

Men desire to be ruled over by other men. They love it. They need it. The anarchistic Gospel of God is not foremost one of eradicating ignorance with education, but one of chasing away the cobwebs of fear and unrighteousness in dead, dusty, hardened hearts. It is not a lack of knowledge that must be overcome, but the willful sin that darkens and debases men’s minds.

You see, men need their feudalism to feel safe from the unknown, protected from personal failure, insured against invasion or natural disaster, and justified in their sloth and apathy that creates and sustains kingdoms that produce civil slavery and hardened hearts.

Men need constitutions to bind them to the fate of their neighbor, contracting them together in mutual surety for collective debt, walking by sight of guaranteed civil provision, instead of by the faith of God’s Providence; forcing one another to be responsible for each other’s fiat prosperity, enslaving each other for their mutual want of forced benefits: those sacrifices with the blood of struggle in them.

Men need rulers to perform their social virtues for them through a bureaucratic Corban, taking care of their neighbor through social welfare schemes and government services in their sloth, and taking care of themselves through the application of benefits in their covetousness. Men want to be able to break the Sabbath, resting now to work it off later, borrowing against the future so they can fail to even pay back the interest of their debt, much less the principle.

They need to eat at the tables and banks of rulers, wiping their mouths, saying they have done no wrong, pretending as though they did not just take a bite out of their fellows slaves. Men are chained to that table by their own rejection of God and the personal responsibilities that come with His Gospel of Freemen under righteousness. Men reject the opportunity to walk by faith in an adhocracy of freewill association, taking care of each other through exclusive charity instead of taxation, and praying for daily bread through hope, instead of socialist entitlement. 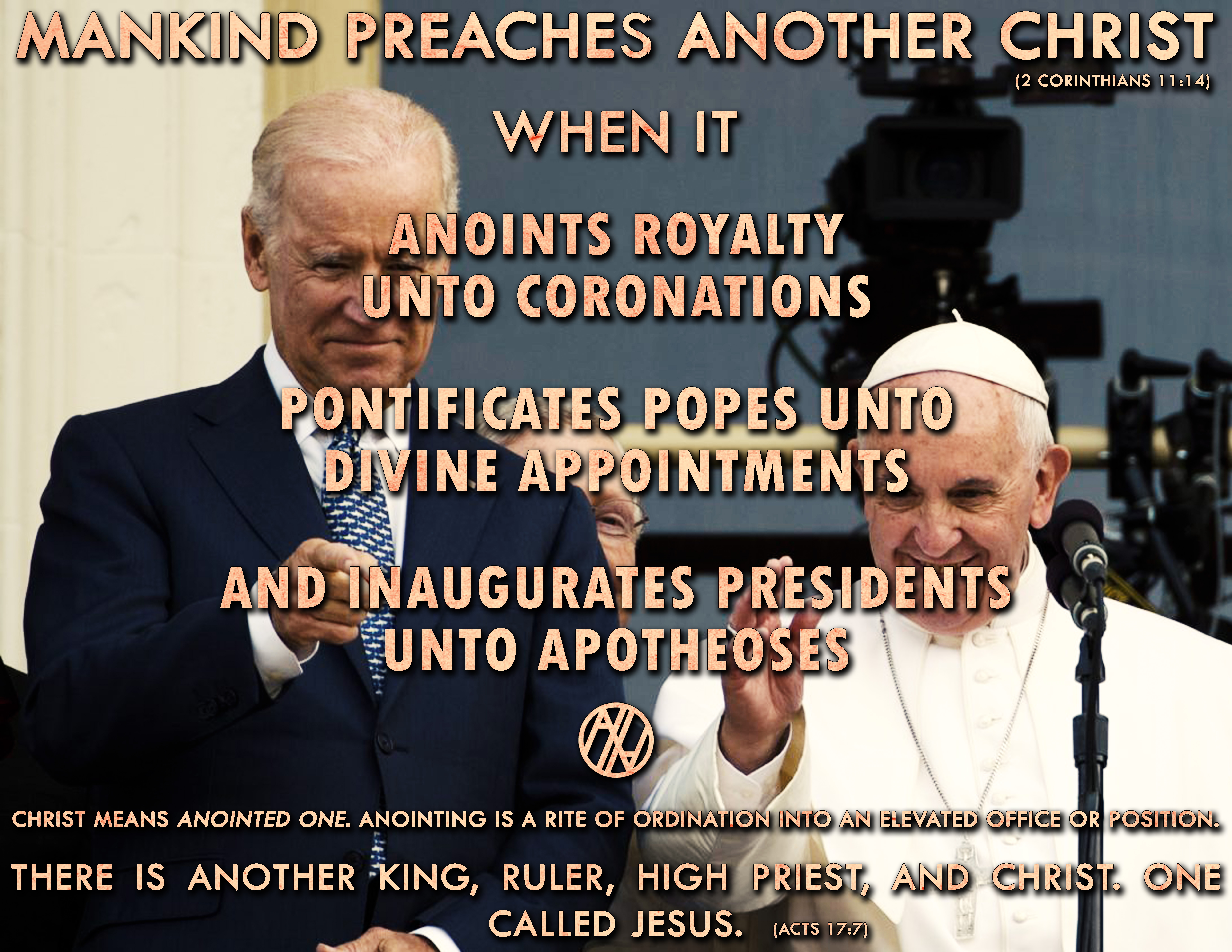 This is not so much an ignorance issue as it is a conflict of interest issue, because when the ignorance is confronted and the light is revealed, the men in bondage often scurry back into the darkness, defending the protection of their cage, safeguarding their illusions of statism more desperately than their illusions over any other thing, even including the subjects of abortion and apathy towards abortion. They are as tenacious as ancient Israel, chasing after the dainties of Pharaoh or other foreign gods, rejecting God’s Providence, and binding themselves by social contracts rather than by love.

The hearts of men are full of hatred, cowardice, sloth, and covetousness. Likewise, it leads them into the civil traps that God has always called slavery, leading to their own destruction, damnation, and economic collapse. Try and educate those hearts about the alternative Kingdom of Heaven that liberates man from the dominion of man and, being unregenerate, they will play dead as is custom in the Valley of Dry Bones. But some may see their error, come alive and begin loving their neighbor as themselves, walking in repentance, and seek the literal, jurisdictional, alternative Kingdom that is built upon the rock and bound together in love, forgiveness, and life and lasts from generation to generation.

Bankrupt bureaucracies are installed by Christless men as a by-product of the socialism in their hearts, but they are also used by God to bring judgement onto those same depraved men through the heavy legal and financial burdens of governments in debt.

“For he is the minister of God to thee for good. But if thou do that which is evil, be afraid; for he beareth not the sword in vain: for he is the minister of God, a revenger to execute wrath upon him that doeth evil. Wherefore ye must needs be subject, not only for wrath, but also for conscience sake. For for this cause pay ye tribute also: for they are God’s ministers, attending continually upon this very thing.” (Romans 13:4-6)

Electing men into authoritative office is a wicked work. Scripture says so everywhere. One defining characteristic of authoritative office is that it invariably institutes taxation to even function. In this way, authoritative office is a terror to wicked works. This is why you pay taxes, to teach you to cry out to God in repentance. Your judgment for creating institutions is that they compel your forced contributions and then use it to exercise authority over you. This system providentially functions as an effective ouroboros, being its own destruction, enslaving the very people who create it and live by its sword. This is both the birth and death of socialist societies. The beginning and the end of the pragmatism of institutionalism. This principle is described all over scripture:

“Let their table become a snare before them: and that which should have been for their welfare, let it become a trap.” (Psalms 69:22)

“My son, if sinners entice thee, consent thou not. If they say, Come with us, let us lay wait for blood, let us lurk privily for the innocent without cause: Let us swallow them up alive as the grave; and whole, as those that go down into the pit: We shall find all precious substance, we shall fill our houses with spoil: Cast in thy lot among us; let us all have one purse: My son, walk not thou in the way with them; refrain thy foot from their path: For their feet run to evil, and make haste to shed blood. Surely in vain the net is spread in the sight of any bird. And they lay wait for their own blood; they lurk privily for their own lives. So are the ways of every one that is greedy of gain; which taketh away the life of the owners thereof.” (Proverbs 1:10-19)

Satan actually desires that “good men” be elected into civil office. This is because nicolaitans who take the name “Christian” in vain and profess all of the good-sounding, churchy positions while still playing Benefactor who exercises authority and is therefore entirely socialist in principle, will do so much more to lead the people astray, possibly deceive the very elect, promote the strong delusion, and lead the great falling away from the faith than someone who is an openly wicked tyrant by the standards of churchians. Relatively “good” men in office do so much more to further the kingdoms of darkness by deception and enticement than relatively “bad men.” These men are strategically necessary to steal away the faith of the people in the Kingdom of God and place it into the kingdoms of Satan.

And yet, the idea that magistrates are objectively beneficial to society is a common one in churchian dogma, and many false teachers have compounded this confusion into dead tradition. John Calvin, one of the biggest influencers of anti-biblical instruction on modern “christianity” has a lot to say on the subject, in direct contradiction to scripture:

“Accordingly, no one ought to doubt that civil authority is a calling, not only holy and lawful before God, but also the most sacred and by far the most honourable of all callings in the whole life of mortal man.”

“…for they (magistrates) have not ascended by their own power into this high station, but have been placed there by the Lord’s hand… The reason why we ought to be subject to magistrates is because they are constituted by God’s ordination. For since it pleases God thus to govern the world, he who attempts to invert the order of God, and thus to resist God himself, despises his power; since to despise the providence of him who is the founder of civil power, is to carry on war with him. Understand further, that powers are from God… because he has appointed them for the legitimate and just government of the world.”

“…obedience is due to all who rule, because they have been raised to that honour not by chance, but by God’s providence.”

“And, indeed, the depravity of men is not a reason why God’s ordinance should not be loved. Accordingly, seeing that God appointed magistrates and princes for the preservation of mankind, however much they fall short of the divine appointment, still we must not on that account cease to love what belongs to God, and to desire that it may remain in force. That is the reason why believers, in whatever country they live, must not only obey the laws and the government of the magistrates, but likewise in their prayers supplicate God for their salvation.” (Gleason, R. John Calvin and Civil Government. Christian Library.)

Clearly hundreds of years of twisted scripture have enabled the modern pretense at Christianity to condone and justify that which the early christians called sinful abomination. As they warned, false christs continue to make merchandise of the people by professing to “improve” society, but only lead them further into bondage through sloth and covetousness. Policies concerning welfare , perverted “justice,” and even their own salaries are all based on covetousness, civil bondage, and the sloth of the people. Human civil government practices public religion and cannot, by definition, practice pure and undefiled religion. The former is the broad way that leads to destruction, fortified by Satan’s men. The latter is the narrow way that leads to salvation and is fortified by men of a different kingdom and government.